It has been built where S.Francis asked to be buried. It’s a remarkable building made of two different churches one over the other. Full of marvellous wall paintings by Giotto, Simone Martini, Lorenzetti and others.

Santa Chiara di Assisi’s Church is built with a specific rose stone of the Subasio Mountain. It contains precious wallpaintings from XII to XIV century and the Crucifix sent by St. Francis to St. Damiano to “Refound the Church”

It is the Center of Assisi, fulcrum of citizen’s social, cultural and political life. Very well kept (as well as all the rest of Assisi) has followed and witnessed in the centuries the evolution of times

The Rocca has been built as a feudal german castel. Emperor Federico II of Svevia spent some years of his youth (he was baptized in Assisi in 1197 at the age of three). The it was destroyed by Assisans during independentist riots and only in 1367 Albornoz Cardinal rebuilt it using most of the left structure of the Rocca.

The Basilica rises in the plain in front of Assisi and protects (contains) the Porziuncola, where St. Francis founded his Order and the Transid Chapel where he died October the 3rd 1226. The Church hosts some wallpaintings by Appiani (1757) and paintings by Pomarancio (1600), Giorgetti, Sermei, Salimbeni and Zuccari brothers. 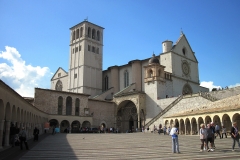 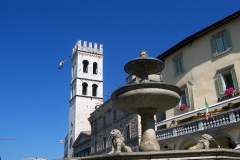 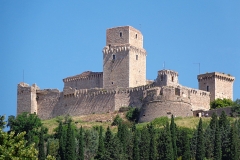 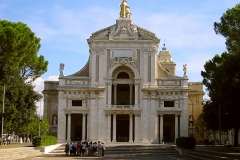 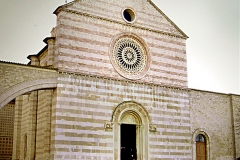